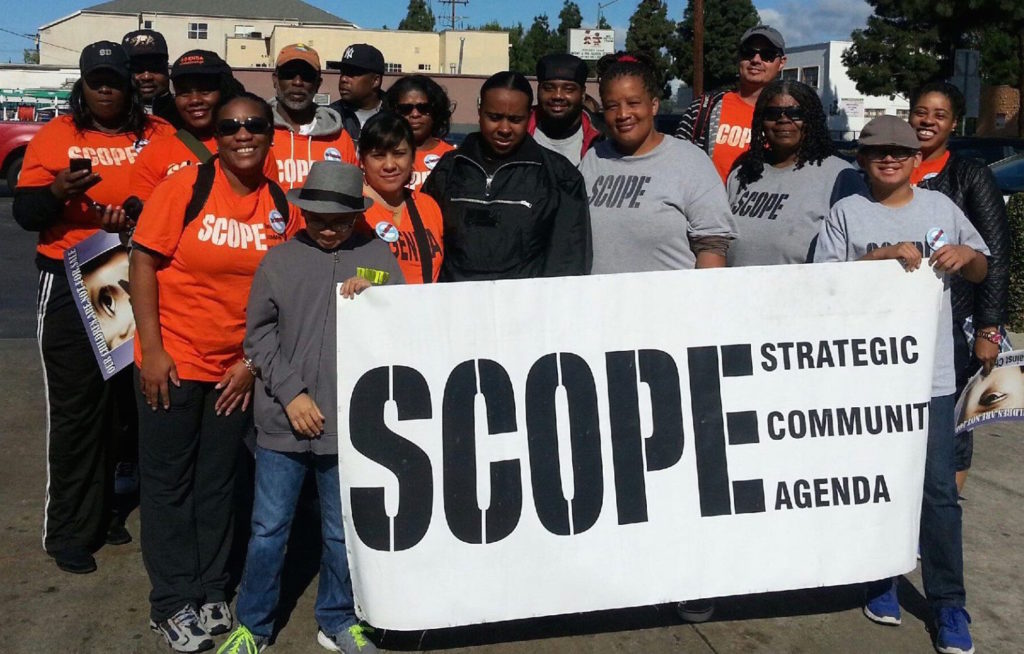 South Los Angeles has endured drastic changes over the decades, from its pre-World War II prominence as one of the most desirable neighborhoods to live in to the violent segregation residents faced through illegal housing practices. Continued disinvestment in public resources over the years coupled with rampant institutional racism that denied people of color access to quality jobs and education left families in a poverty trap that is still felt today. Through the introduction of drugs into the community, gangs and violence began taking over.

All the while violence perpetuated by corrupt police officers became an everyday occurrence. It didn’t matter if you were involved in criminal activity or walking to the store, being Black makes many a target for harassment and abuse. Prisons and jails began to fill up with Black men who were profiled or given unnecessary prison time for minor crimes. The massive job void left behind by manufacturing companies, which many residents relied on as a path to the middle class, was never restored.

As the city of Los Angeles grew and developed around South LA, residents were exposed to health disparities that directly contributed to chronic illnesses. Freeways literally separate the neighborhood from other communities, while ruining air quality with car exhaust. It comes as no surprise that South LA has some of the highest rates of asthma and infant mortality as a result of freeways and pollution in the neighborhood. With no access to quality super markets or hospitals, residents have to continually go outside their neighborhood to access healthy food and medical care. At the same time, liquor stores and fast food restaurants began to over saturate the community.

Health issues like obesity, diabetes, and other conditions related to poor eating habits increased and continue to be a problem that afflicts the community. With so many compounding challenges affecting our quality of life from every which way, we must be united as a community to confront them and find a solution. This is where SCOPE got its start more than 20 years ago.

Formed by community activists after the Los Angeles Uprising, the goal of the organization is to empower residents to be able to advocate for themselves through leadership training. SCOPE has continually fought for and won new job creation models that directly benefit the diverse community that makes up South LA. In 2006, the formation of the LA Apollo Alliance lead to the creation of a model for a green retrofit and work force program that remodeled city municipal buildings with energy and water saving upgrades. Through a coalition of community-based organizations, labor unions, and environmental groups, the green retrofit and workforce program was the first of its kind. Not only did the program help address the city’s unemployed rate, but it also provided workers from the South LA community an opportunity to learn these new skills, while starting them on the path to a stable career.

Supporting the work of the LA Apollo Alliance, we set our sights on reshaping state policy to directly benefit low-income communities of color in Assembly Bill 32, California Global Warming Solutions Act, and Senate Bill 535, Disadvantaged Communities. Through AB 32, greenhouse gas emissions have to be reduced to the same levels as they were back in 1990 by the year 2020. The California Air Resources Board then created a plan to address climate change, which included a cap and trade program. The program would cap carbon emissions for individual companies while at the same time, auctioning off additional carbon permits that would allow the release of a metric ton of greenhouse gases. The money from these permits would fund state programs and projects that would reduce greenhouse gas emissions. The role of SB 535 was to make sure that money from the cap-and-trade program went to the communities that needed economic support in supporting jobs and healthy environment initiatives.

However, it’s been almost ten years since we first achieved these victories. The current economic state of California has changed vastly, but the policies that provide funding have not. A solution to this economic imbalance is to ensure that everyone in the state of California is paying their fair share of taxes. For far too long, corporations and the wealthy have used property tax loopholes found in Proposition 13 to avoid paying fees while making a profit from the disinvestment of our communities. Passed in 1978 as a way to protect homeowners by ensuring lower tax rates, especially those on fixed income, commercial property owners have been using Prop 13 to avoid paying current market tax rates. Money generated from property taxes directly fund education and public services in our communities. As a result, we have all been directly short-changed for years by this current system.

Years of budget cuts and short falls have led to massive gaps in equality for our schools and neighborhoods. In 2012, Proposition 30, Temporary Taxes to Fund Education, passed to help make up some of these shortfalls in our public schools, but it was only a temporary solution. We need permanent solutions and reforming the current tax and fiscal policies in our state is critical to achieve this strategy. Through reforms, our state will be better able to increase funding for schools; work source programs and other needed public services. As a state and a country, it’s both unfair and unjust to keep communities in poverty traps while corporations and the wealthy don’t do their part when it comes to paying taxes.

SCOPE advocates for community-oriented solutions that are able to make the impactful changes we want to see in our community. “We need investment in South LA because we matter. We need to invest in ourselves,” says SCOPE member Tracey Beltran. Our members envision a South LA in which they can breathe clean air, have jobs that pay a living wage, schools offer quality education, there are healthy food choices, and they are being able to walk safely down the street without fear. Our work in the community is shaped by the voices of those directly impacted. We need to continue fighting for jobs that will address the health disparities and lack of investment in our community. We did once through the LA Apollo Alliance almost ten years ago and we will do it again today.