Our Take: We need a spending plan that reflects the values of voters 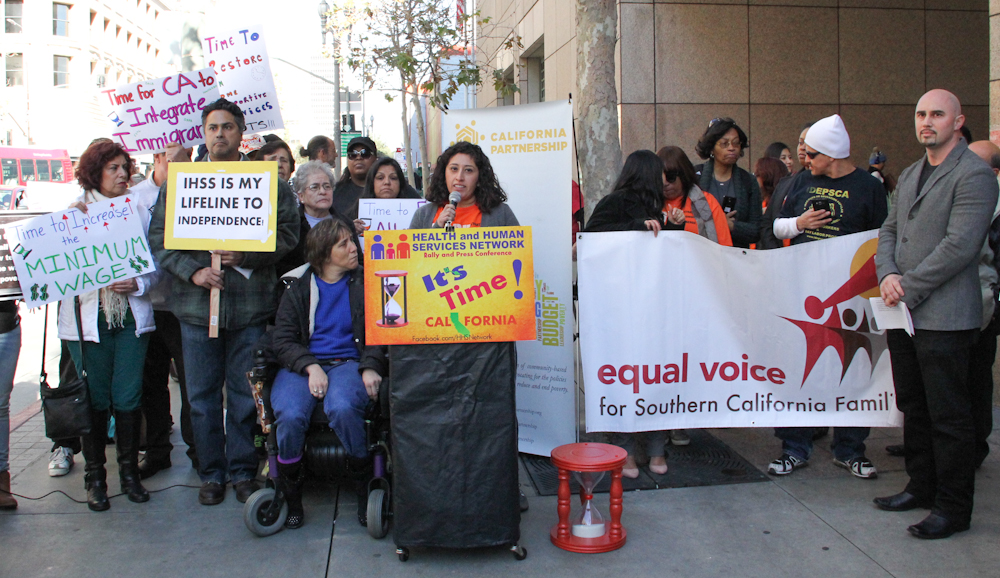 SCOPE Organizer, Tracy Beltran, speaking at a CA State Budget press conference in Downtown Los Angeles in response to the Governors release of his draft budget.

As most working families know, California’s economic recovery has been uneven. For the millions of families still struggling to make ends meet, stagnant wages, budget cuts and a dwindling safety net have not translated into growing prosperity. However in recent years California has passed legislation to increase public investment and to ensure investments improve outcomes for all Californians. This year, stronger than expected revenue growth has provided an opportunity for the state to achieve the full intent of this legislation. However, Governor Brown’s recent budget proposal largely fails the communities hardest hit by decades of disinvestment.

Prop 47 Savings:
This year’s proposed budget guts investments generated from Prop 47, the law that passed with overwhelming support in 2014 changing six low level, non-violent felony charges to misdemeanors. Under Prop 47, money saved from reducing the number of individuals in prison for non-violent crimes is reinvested into mental health and substance abuse treatment, after school programs for our youth, and services for victims of crime. The independent Legislative Analyst’s Office estimated the savings from this new law at $100-$200 million, however the Governor’s proposal only allocates $29.3 million into the savings fund. As a result, more public funds will remain in the prison system rather than going toward prevention and rehabilitation programs that our communities need.

Greenhouse Gas Reduction Fund Investments:
Similarly, this year’s targeted investments in communities most impacted by air pollution and climate change are significantly shortchanged despite growing revenues generated by the cap-and-trade system. Successful programs that target highly polluted and impoverished areas for investment such as the Low-Income Weatherization, Urban Forestry, and Active Transportation programs remain underfunded in the upcoming budget cycle. While the $3.1 billion Greenhouse Gas Reduction Fund (GGRF) budget sounds impressive, over $1 billion is coming from revenues left unallocated in the 2014-15 budget. Climate justice and sustainable transportation advocates alike are concerned about how these funds have been redirected without much detail or public input.

Towards Building a Broader Agenda for Public Investment:
It is important to keep in mind how these investments look side by side. While $29.3 million will be reinvested in treatment and prevention services, this is a drop in the bucket compared to the $10.5 billion corrections budget. And while $775 million of the $3.1 billion total GGRF budget is slated to benefit disadvantaged communities, this pales in comparison to the $19.7 billion going toward roads. Funding for vital safety net programs for our poorest residents such as CalWORKs, child care and preschool programs, and affordable housing, has been slashed and remains well below pre-recession levels. These cuts have left families in deep poverty struggling to advance. In 2012, SCOPE and our members played a pivotal role in passing Prop 30, a temporary increase in the state sales tax and personal income tax rate for the state’s wealthiest individuals to redirect funding to the gutted education system. The progressive revenue generated by Prop 30 and a gradually improving economy has enabled the state to increase pupil spending and provide high-quality instruction, especially important for children in low-income communities.

Similar in intent, Prop 47 and SB 535—which ensures disadvantaged communities receive a baseline percentage of GGRF investments—are a testament to our desire to invest in a more just future, healthier communities, and shared prosperity and opportunity for all Californians. We urge Governor Brown to restore core services to pre-recession levels and maximize California’s investment in treatment and prevention services, climate resilience efforts, and other life-changing programs that reflect the values of voters. SCOPE is committed to ensuring these investments translate into programs that transform lives and force our legislators to rethink our spending priorities. In the months ahead we look forward to getting your input to shape a revised spending plan that doesn’t sacrifice the priorities of our communities most in need.