When Olivia Barbour steps out of her home in South Los Angeles, she inhales a flurry of fumes from the heavy trucks passing along Imperial Highway on their daily routes, commuter traffic off the I-110 and I-105, and low flying airplanes on their way to LAX. She knows the air quality in her neighborhood isn’t good for her health. As an asthma sufferer, she relies on respirators in multiple rooms of her home to cope with her symptoms. Living with not one, but multiple sources of air pollution is not out of the ordinary here, where nine percent of South LA residents live within 500 feet of a truck route, eight percent live within 500 feet of a manufacturing facility, and at least 51 active oil wells still operate in residential neighborhoods.¹ ² South LA is often talked about it terms of its economic issues such as high unemployment rates and lack of job training opportunities, and in the past much of SCOPE’s work has focused on these issues. But over the years we’ve found that it’s impossible to separate environmental injustice from economic injustice and we’ve seen from our residents’ stories that these less conspicuous sources of pollution have undeniably created cumulative impacts on the health of South LA’s predominantly low income, black, and brown residents. 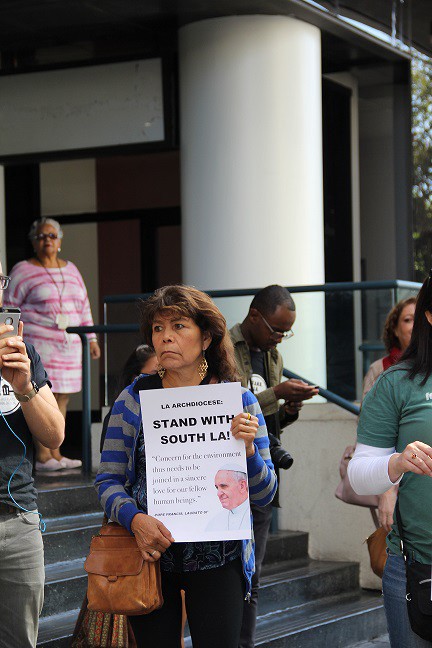 Health statistics for South LA reflect the realities of our community’s struggle to breathe clean air. In 2010, this area had one of the highest asthma emergency visit and hospitalization rates in the county. In comparison, the Westside had the lowest asthma emergency visit and hospitalization rates.3 Furthermore, in 2009 the Health Service Plan Area encompassing South LA had the highest mortality rate in LA County for coronary heart disease, a disease which is also linked to exposure to air pollution.

When factoring in how South LA is literally enclosed by freeways and high traffic commercial corridors– the I-10 to the North, I-105 to the South, and I-405 to the West and the Alameda Corridor to the East– these statistics are not hard to believe. With a median income of $31,905, South LA households also face limited access to healthcare, healthy foods, and green space, which only serve to worsen their vulnerability to air pollution.4 In fact, socioeconomic factors coupled with proximity to pollution have made it so that a shocking 74.2% of Los Angeles City Council District 8, 96.4% of Council District 9, and 64.7% of Council District 10, all districts which include South LA, are considered environmentally disadvantaged areas, by the state of California (using CalEnviroScreen 2.0).5

A History of Environmental Racism

How did South LA, a predominantly black and brown low income community, become home to multiple sources of pollution? It was planned.

During the Great Migration, redlining and restrictive covenants limited housing options for black, Latino, and Asian communities in Los Angeles. These racist practices made it so that in the 1920s, people of color were barred from accessing about 95% of the city’s housing stock. The remaining 5% that allowed black residents included areas surrounding Central Avenue, now considered Historic South Central.  These racially unrestricted neighborhoods were often located near areas zoned for polluting industries. Meanwhile, white middle and upper class communities on the West Side, an area zoned primarily for residential uses, were largely protected from industrial pollution through the zoning code and decisions made by the city’s planning entity.6 As the city grew to become an industrial hub during World War II, more industrial manufacturing facilities were sited in neighborhoods adjacent to Historic South Central and white families began to flee the region that is today known as South and Southeast LA.7

In the 1950s and 1960s, the selection of routes for major transportation corridors like the I-110 and I-10 further shaped South LA’s environmental conditions. The chosen routes, which went through politically disenfranchised black and brown communities in South LA, Southeast LA, and Boyle Heights, didn’t just contribute the air pollution community members endure today. The construction process also displaced entire communities and destroyed hundreds of homes, playing a part in creating overcrowded housing conditions that persist in South LA today.8 9 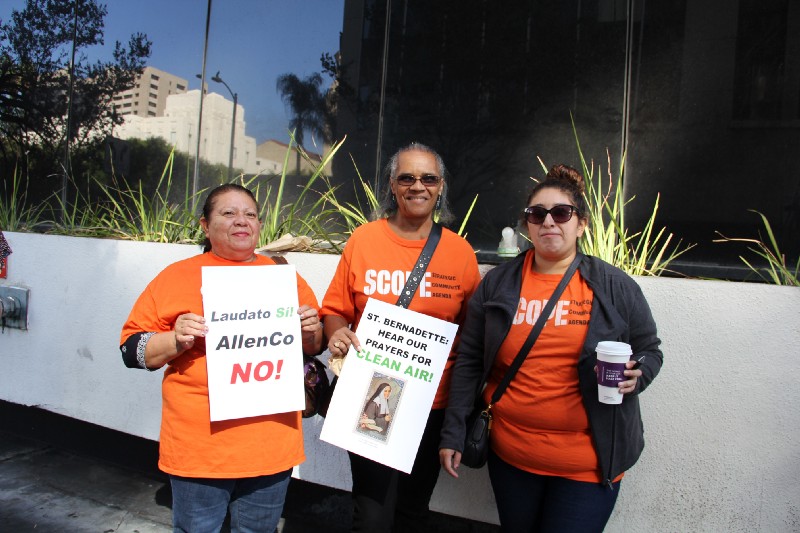 The intentionality with which an environmentally unjust South LA was created demands deliberateness in creating an environmentally equitable South LA moving forward. In order to begin remedying the historical burdens placed on our community, investment into and future planning of South LA must be grounded in environmental and economic justice. This means improving public transportation to reduce localized pollution, transitioning out harmful industries like neighborhood oil drilling, and pushing for community-driven climate investments with safeguards against displacement, such as the Transformative Climate Communities. This work also requires furthering quality job pathways in non-polluting industries and developing energy efficient, affordable housing so our communities can afford to stay in South LA. Above all, moving towards environmental justice means community members who cope with and contest the legacy of environmental racism everyday, must be the planners, spokespeople, and decision-makers in creating this change.

This is the first part of our South LA to Stay series, a blog and video project where we will be delving into the environmental and economic conditions South LA residents face everyday — from air pollution to fears of being pushed out by new development to lack of access to living wage jobs. Through this project, we hope to share stories of our residents’ resiliency by highlighting why they have chosen to stay in South LA after decades of disinvestment and the changes they demand in environment, jobs, housing, and economic development so that our communities can be in South LA to Stay.