The Center for Community Change asked me, along with long time SCOPE member and grassroots leader, Pat Jones, what we would like to see the Republican candidates debate. This piece continues a campaign at TalkPoverty.org where advocates and people struggling to make ends meet will ask 2016 presidential candidates about how they would significantly reduce poverty and inequality in this country. 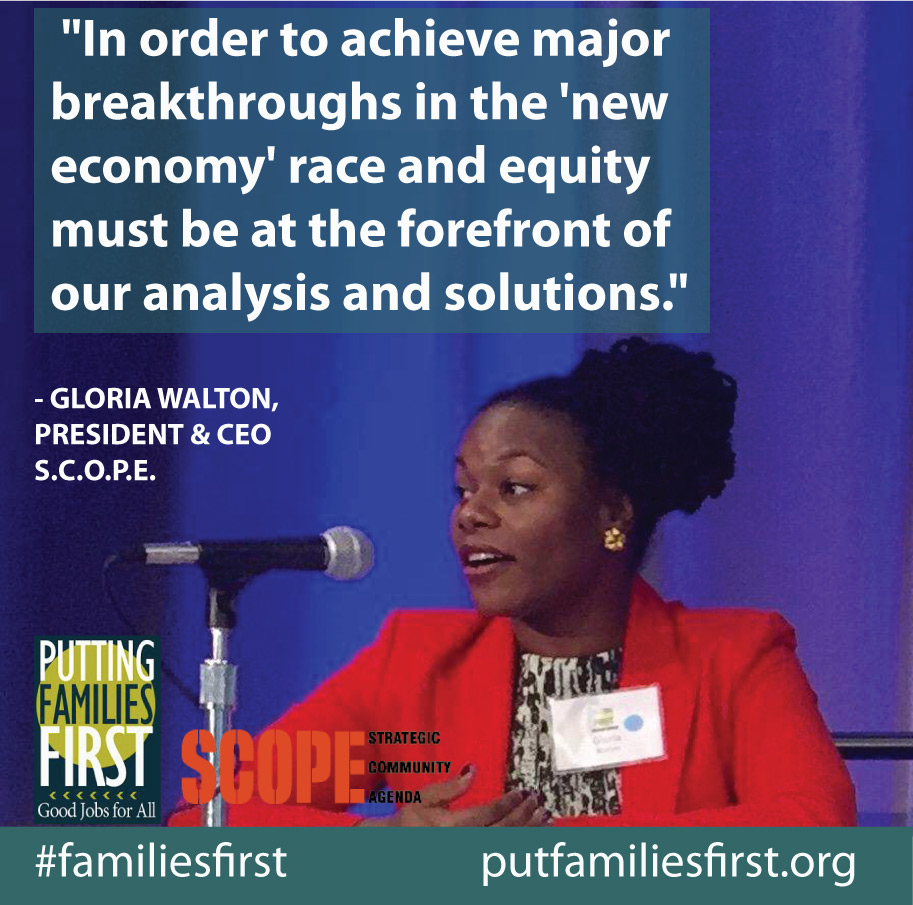 The upcoming Republican presidential debate in Simi Valley, California offers prospective leaders of the largest economy in the world a chance to speak to the concerns of the 106 million Americans who are struggling to make ends meet. The looming question facing the working and middle class is this: how do we build a system that works for all of us?

The first Republican debates ran three and a half hours with 17 participants. The moderators failed to ask the kinds of questions that force candidates to say exactly how they will create opportunities for Americans being left behind. Even worse was the reinforcement of false and offensive stereotypes. When Fox News anchor and debate host Martha MacCallum asked—“How do you get Americans who are able to work to take the job instead of a handout?”—she effectively called millions of struggling Americans freeloaders.

We need a debate with powerful solutions, not tired stereotypes.

Yet the next debate will be held at the library dedicated to the President who created or propagated many of the stereotypes that are still used to demonize people who are struggling in our economy. Ronald Reagan is seen by many as a hero—a Dirty Harry who told it like it is and stood up to friend and foe alike. But to many low-income families, he is a modern-day Ebenezer Scrooge, who—like the famous miser—exerted his power in a way that has made it harder for people to lift themselves up.

Reaganomics was rooted in the idea that if we build an economy that puts the interests of the wealthy first, then the benefits will trickle down to the rest of society. His formula was one part tax cuts for the well-off, and three parts dismantling labor unions, cutting spending on social programs, and neutering government oversight.

The rigged rules of today’s economy are the logical conclusion of Reagan’s approach to public policy.

“In so many domains, the course was set in the 1980s,” says Luke Shaefer, a University of Michigan professor and co-author of $2.00 A Day, Living on Almost Nothing in America. “Reagan set the course and the [politicians] who have come afterwards have taken it even further beyond.”

One of Reagan’s enduring legacies was his deft use of rhetoric to push his ideas. None was more harmful than the label “welfare queen,” a pejorative term he coined that has become synonymous with black single mothers who receive public assistance.

For Gloria Walton, it is a deeply personal slur. She grew up poor in Mississippi with a single black mother who worked all of her life in minimum wage jobs to make ends meet.

“My mom was working and needed public assistance to help make ends meet,” she says. “But Reagan demonized black women with this idea of the welfare queen. It’s offensive.”

Today, Walton is the president and CEO of Strategic Concepts in Organizing and Policy Education (SCOPE) in Los Angeles, training low-income adults in careers that will help them sustain their families. She says SCOPE combats the effects of Reagan-era policies like deregulation and cuts in federal programs, as well as wage stagnation, which have all devastated low-income communities.

Walton wants to ask all of the presidential candidates: “Economic inequality has widened. In my city, per capita income is $13,243 in South LA and $128,000 in Bel Air. What can you say to the hard-working men and women of South L.A. to justify this historically unprecedented income gap?”

Since Reagan, the gap between the wealthy few and the rest of us has reached historic proportions. After-tax incomes of the top 1 percent grew almost twice as quickly as they did for middle-class families between 1988 and 2011, according to data from the Congressional Budget Office.

Reagan’s efforts to weaken unions in order to strengthen corporations helped increase the gap because it reduced bargaining power and the number of well-paying jobs. When he fired striking air traffic controllers during his first term, it was considered an opening salvo on labor and a signal to corporations that they came first. Today, 11 percent of workers belong to unions, compared to 20 percent in 1983. One result has been a rise in temporary workers with few or no benefits. There are almost 3 million temporary workers in the U.S. today, more than double the approximately 1.2 million temporary workers in 1990.

Sonya Spann, 50, is one of those workers. She earns $11 an hour as a billing contractor for an insurance company in Birmingham, Alabama. Spann has no health or retirement benefits, or paid sick or family leave. But this was the best job she could find after the hospital where she worked shut down. Her husband lost his full-time job during the recession and now picks up hours working at a retail store for minimum wage.

“Every time we try to get off our knees and attempt to stand up, we get the rug pulled out from under us,” Sonya says. “What would you do in my situation and what are you going to do to create family-sustaining jobs?”

Current efforts by legislators to cut SNAP, require drug testing of recipients of nutrition assistance, or implement other punitive measures that reduce the number of people eligible for government aid, all grow out of the Reagan tradition.

Pat Jones, 63, sees the effects of this deprivation on her south LA community. It is a neighborhood wracked by poverty and a lack of jobs, where families struggling to make ends meet on the minimum wage must choose which utility is the most important to pay that month, she says.

“We look at the job market here and a lot of us can’t qualify for jobs or there are no training programs,” she says. “Corporations run everything. Reagan did that.”

Jones asks all presidential candidates: “Everybody has to pay their fair share of taxes, but corporations and the wealthy have a string of exemptions and loopholes. Why can’t they pay their fair share and what are you going to do to increase investment and opportunity in low-income communities?”

Here’s hoping that presidential candidates in both parties start answering the questions that people who are struggling want answers to.

*This post was originally published on Talk Poverty by Marisol Bello*